Got a text the other day, telling me I have some raffle points and the prize is a hundred grand shopping money at SM. That got me thinking—if I won (though my chances are slim, since I didn’t join the raffle), what would I buy? Well, here’s my shopping list:

Posted by Ree at 12:03 PM No comments: Links to this post

They came to pick up my beloved books today. I decided to donate them to a community reading room in a seamen's village in Cavite. I was saving them for my own reading room project, but since I don't think that's happening any time soon, those books will be better off with other people enjoying them.

More space for new books then. I welcome donations. :D

Hmm. Let's make it a game. Send me a book (or at least suggest a title of a book) you think I should read. :)
Posted by Ree at 11:56 AM No comments: Links to this post

In a way, motherhood is easier in my generation, because of all the cool baby gadgets and gizmos we have (but whether it's easier to raise kids now than in our moms' generation is a different story). My favorite things so far (aside from the stuff in my last post):

Posted by Ree at 1:32 PM No comments: Links to this post

There was a post on one of my mailing lists a few weeks back, asking what would make a good gift for a woman who decided to be a SAHM--otherwise known as a stay-at-home-mom. Having made the transition myself (technically though, I'm a WAHM, a work-at-home-mom, since I still do rackets every now and then), here's my list of things I'd appreciate (and I'm sure other SAHMs would too): 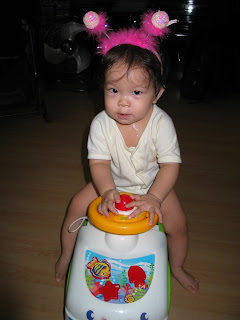 It's 4:20AM. I hear giggling. I pry an eye open. Raine's huge, three-tooth grin greets me, and she squeals in delight, as if saying, "Finally! Someone else is awake!"

She's standing beside the bed, her head level with mine. "Babababa," she says as she thrusts a furry, pink sequined-antennaed hairband at me. I sit up groggily. "Oh, you want to wear your bugaboo," I say. She emphatically nods a yes. I put the hairband on her (crookedly, I think) and lay back down. She giggles and babbles some more. Then she sits down and plays with her toys in the half dark. I drift off.

It's 4:43AM. I feel something hard on my hand. My eyes open to Raine's pleading ones. I look down at my hand. She wants me to hold on to her favorite garden-themed picture frame. I oblige. It feels as if I were in a dream, playing Point to the Object. "Where's the ladybug? Where's the butterfly? Where's the flower?" I mumble. I can barely keep my eyes open to check if she does point to the right thing.

4:49AM. I can hear Raine giggling. She's peeking over me, waving at her Daddy, who turns over in his sleep. I'm still holding on to the picture frame. "It's too early to be awake, Rainey," I tell her. She yawns and goes back to playing, her twinkling antennas bouncing on her head.

At 5AM I get up to go to the bathroom. Raine crawls after me a few moments later. She teeters at the border of the bathroom and the hallway, since she's not allowed inside the bathroom. She hands me my cellphone. I thank her. She sits in the hallway, patiently waiting as I finish my business. When I get out, she lifts her arms to be carried. She's taken off her bugaboo. I bring her back to bed and we snuggle down. In a few minutes, we're both asleep.
Posted by Ree at 3:35 PM No comments: Links to this post

A Rock and a Hard Place -- More Party Planning Adventures 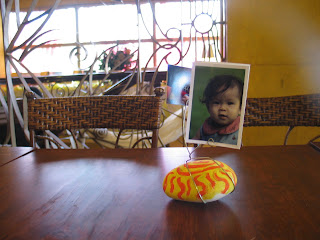 Growing up, we always celebrated my birthday at home. After school, entire class would fall in line (there were less than 30 of us) and we would walk to my house (I lived like 5 minutes away, and when I was in Kinder, I used to go home every time the teacher told us to go to the bathroom). My mom, aunts and uncle would work for weeks before my party, making invitations, decorations and party favors. I recently chatted with a grade-school classmate, and she said they so looked forward to my parties every year.

My ultimate, all-time, absolutely most favorite party was my seventh. Since I was already a bookworm way back then, my mom decided to have books as a theme. My aunt wrote and illustrated a story that worked in all the party details; then they mimeographed copies (computers and printers and all that weren't used back then); then cut up each page and hand-colored each drawing; my uncle cut up illustration board to make a cover for each book invitation, which my aunt drew on again. Imagine making more than 30 pieces of that! The giveaways were candies and little toys in a 'book' box my mom made from cardboard, with the name of each guest written on the spine. During the party the giveaways were arranged on the shelf, like a library. They cooked all the food (yes, the usual spaghetti and hotdogs and barbecue), organized all the games and did all the hosting. Only when the party was done did the adults come to pick up their kids.
Anyway, that was a rather long intro to this post on planning and executing Raine's first party. I wanted her party to be like mine, and my sisters'. I didn't want store bought stuff, or party professionals. But given that 1) Raine's guest list was huge, since it was her dedication and birthday celebration; 2) our current house wouldn't fit all the guests; and 3) even if it did, I don't think I can cook that large scale. So I settled for having it in Mario's Kitchen in Tiendesitas instead.
Mario's offered to do balloon centerpieces for the tables (for an additional fee, of course) to make it more festive, but I declined. For one thing, what will you do with the balloons after the party? I don't think they're quite environment friendly as well. And also, I am such a cheapskate. I can't imagine spending P1,200 for balloons. So in the tradition of our Baguio parties, I decided to make my own centerpieces.
I liked the idea of some friends of ours, who had their photos at the wedding reception tables. I thought it was a good idea to let people see pictures of Raine as she grew up (and besides, it was good use, other than Multiply, for the thousands of pictures I had of Raine). So I decided to make a rock-and-wire photo holder. Theoretically, it's easy to make. You get a rock, paint it, let it dry, twist wire on and voila! Artsy-craftsy photo holder. Ha! Little did I know.
For one thing, did you know that these days you have to buy rocks? I remember being able to walk around Baguio and rocks were everywhere for the picking (I can imagine myself old and in the rocking chair, saying things like, "Rocks? Rocks? Bah! In my day we didn't need to buy rocks! Oh...you were talking about socks?")! Unless, of course, I went around the village going through the neighbors' landscaped yards, you apparently can no longer pick up rocks these days. Fortunately, my in laws had a nice collection of river stones that they used in a school project (the in laws run a school in San Pablo), so they hauled the rocks from the bukid over to our house for painting.
Now painting was a different thing entirely. I mean how difficult can it be to paint a rock? In my mind, it was such a duh task. And so I kept putting off painting the rocks. Until the day before the party. My friend Stef (Raine's Tishpy--or godmother) came over to help. I am so glad she did. Because I discovered painting rocks is not that easy, especially if you're as--ahem--artistically uninclined as I apparently am. My first rock looked like a bad case of chicken pox and zits. Taking pity on me (and the rocks), Stef said, "Paint stripes...no one can go wrong with stripes." And still Stef had to coach me on how to paint stripes! Ayayay. Putting the wire on wasn't easy either; I couldn't figure out how to use the long nose pliers at first, but I eventually got the hang of it. So long story short, I ended up with only 24 out of the originally planned 40 rock photo holders (I couldn't in good conscience hold Stef hostage until she finished all the rocks). 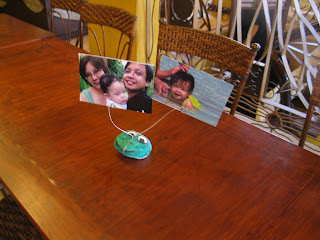 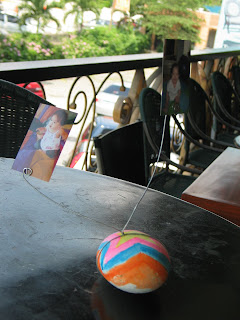 In the end, I think they came out rather nice. Thanks so much, Stef! You are such a blessing! Oh, and Fuji Film in Glorietta had a great printing promo, so I spent half of what I expected for the prints, so that was another blessing. As I mentioned in my previous post, we have experienced such blessings and favor since Raine came into our lives. And we are grateful.
Posted by Ree at 5:18 PM 1 comment: Links to this post